XRP and ONT both moved significantly in response to Bitcoin dipping to $11,600. FTX Token had already been experiencing appreciable price fluctuation. XRP looked precariously perched, trading near a significant level but seemed poised to drop. The longer XRP failed to reclaim its nearest support, the stronger the case became for XRP bears. Ontology had been recovering from the March crash and looked set to continue that trend on a longer time-frame, while indicating bearish pressure on a shorter time frame.

The fact that the RSI value is failing to remain near the 50 mark does not bode well for XRP. It can still recover if buying pressure mounts, but until that is the case the outlook would be bearish.

Volume Profile showed that significant trading activity occured at $0.294 and $0.3. If XRP failed to surmount these levels, the next significant level is at $0.24.

From $0.294 to $0.24, the profile is thin, indicating that the gathered momentum can cause the asset to go past the prices indicated (red arrow).

XRP is a coin ranked third by marketcap, with a capitalization of $13.2 billion. It is an asset many in the ecosystem believes that it hasnt been able to reflect its true price yet. 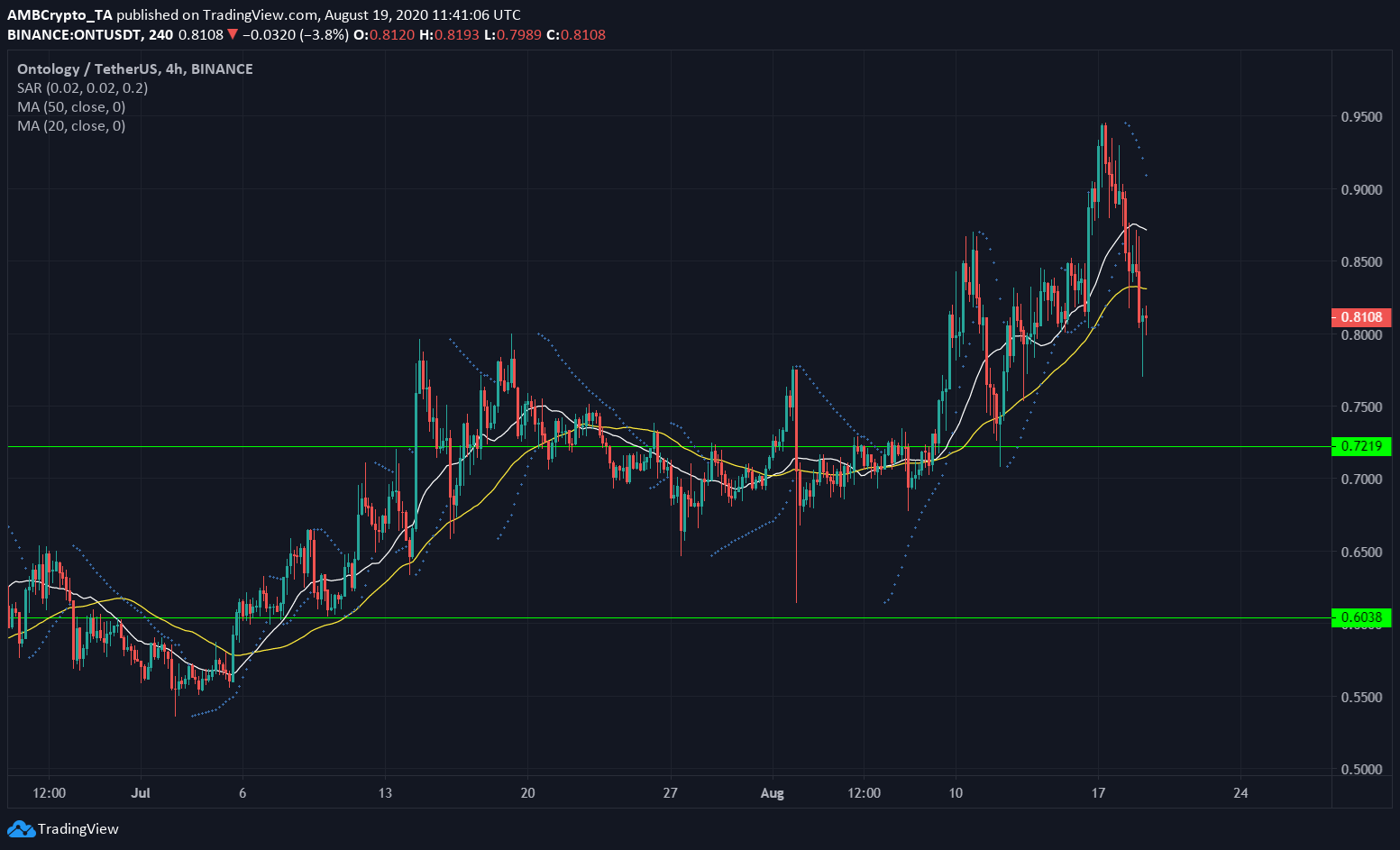 At the time of writing, ONT was trading below both 50 SMA (white) and 100 SMA (yellow). Parabolic SAR also gave a sell signal. on a longer time-frame, ONT has been bullish since March.

ONT looked likely to be pushed lower. Next support for the coin lies at $0.72. Given how strongly the coin has performed in the last few months, a test of that support would present an excellent buying opportunity for investors.

However, a look at low time-frame price action at $0.72 would be necessary to decide ONT momentum, which has been decidedly bearish since a local high near $0.95.

Ontology was ranked 32 with a marketcap of $567 million. In recent news, Waves and Ontology announced a partnership to enable cross-chain communications betweeen the two networks. 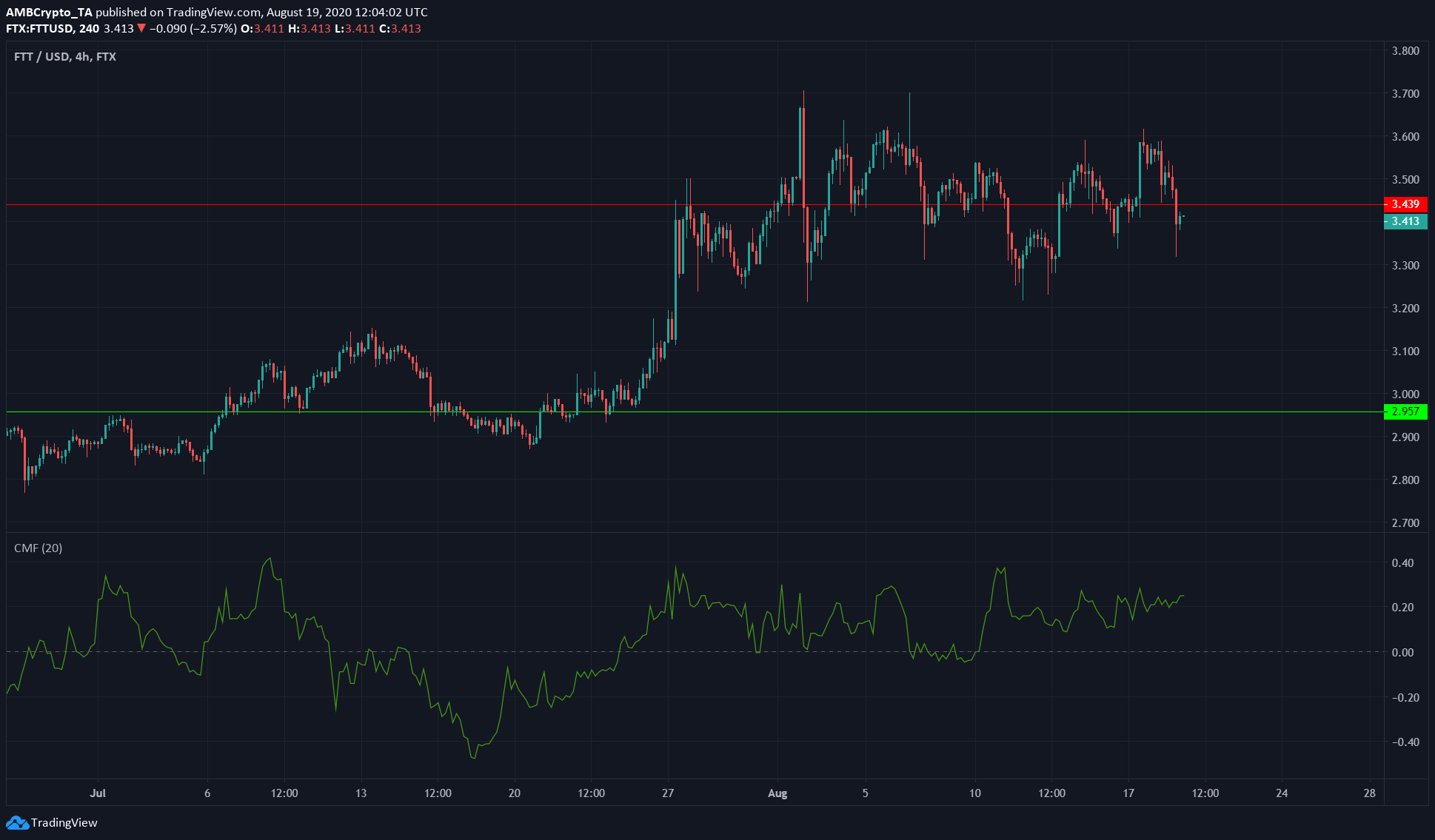 FTX Token is the exchange token ranked 47 on CoinMarketCap, with $321.9 million dollars in capitalization. FTX exchange is one of the platforms, alongside Binance and Poloniex, that have been most active in listing DeFi tokens.

On the charts we can see support at $2.95 and resistance just above trading price, at $3.43. FTT has been pretty volatile in the month of August, with multiple moves of 10% in price in just over two weeks.

Chaikin Money Flow indicator showed that capital flow into the market was still strong, highlighting the strong possibility that FTT’s price would break past resistance to reflect investor confidence by setting new ATHs.

Bitcoin volatility is back: Trading tools can protect both traders and the stability of the industry

Bitcoin is “Fragile” as It Trades Below Multiple Crucial Levels

Bitcoin is “Fragile” as It Trades Below Multiple Crucial Levels