Bitcoin price action has entered into some consolidation on its $500/3-box reversal Point and Figure chart. As a result, a bull flag has now developed with a setup that could trigger a significant breakout move above a triple-top.

A hypothetical long entry for Bitcoin price with a buy stop order at $52,500, a stop loss at $50,500, and a profit target at $62,500. This trade idea represents a 5:1 reward for the risk. In addition, a two to three-box trailing stop would help protect any implied profit post entry.

Ethereum price unable to hold $4,000, but downside resistance may be limited

Ethereum price has struggled to drive above the $4,000 value area. Traders witnessed Ethereum press against the combined power of the Kijun-Sen and Senkou Span B act as resistance since December 20.

Final support on the daily Ichimoku chart for Ethereum is the Tenkan-Sen at $3,960. As long as Ethereum price can maintain a close above the Tenkan-Sen from now until the end of December, Ethereum has a high probability of moving above the $4,000 price range and higher. 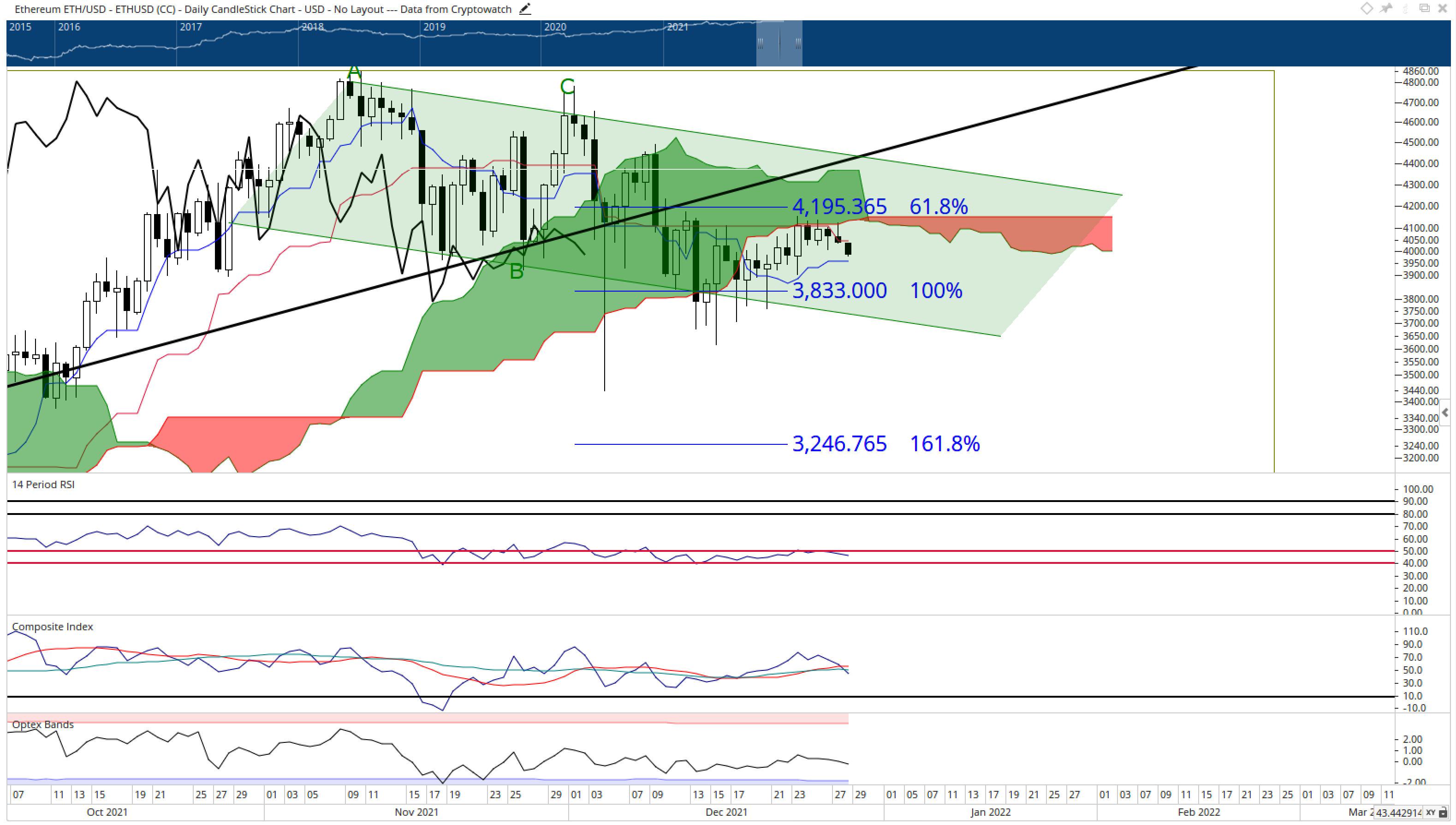 Failure to hold the Tenkan-Sen as support would see Ethereum begin a move towards the 161.8% Fibonacci retracement at $3,250.

XRP price has two critical levels within the Ichimoku Kinko Hyo system that are proving to be difficult for bulls to cross: the Kijun-Sen and Tenkan-Sen. The weekly Tenkan-Sen and Kijun-Sen share the resistance level of $0.97. For the past four weeks, those two Ichimoku levels have halted a chance of a close.

As long as XRP price remains below the Cloud, the Tenkan-Sen, and the Kijun-Sen, XRP is overwhelmingly bearish. However, the threshold to convert into a bull market is becoming increasingly easier to attain. A weekly close above the $0.97 price level would be the most bullish event of the past eight weeks and would likely trigger a move to the $1.70 price range. 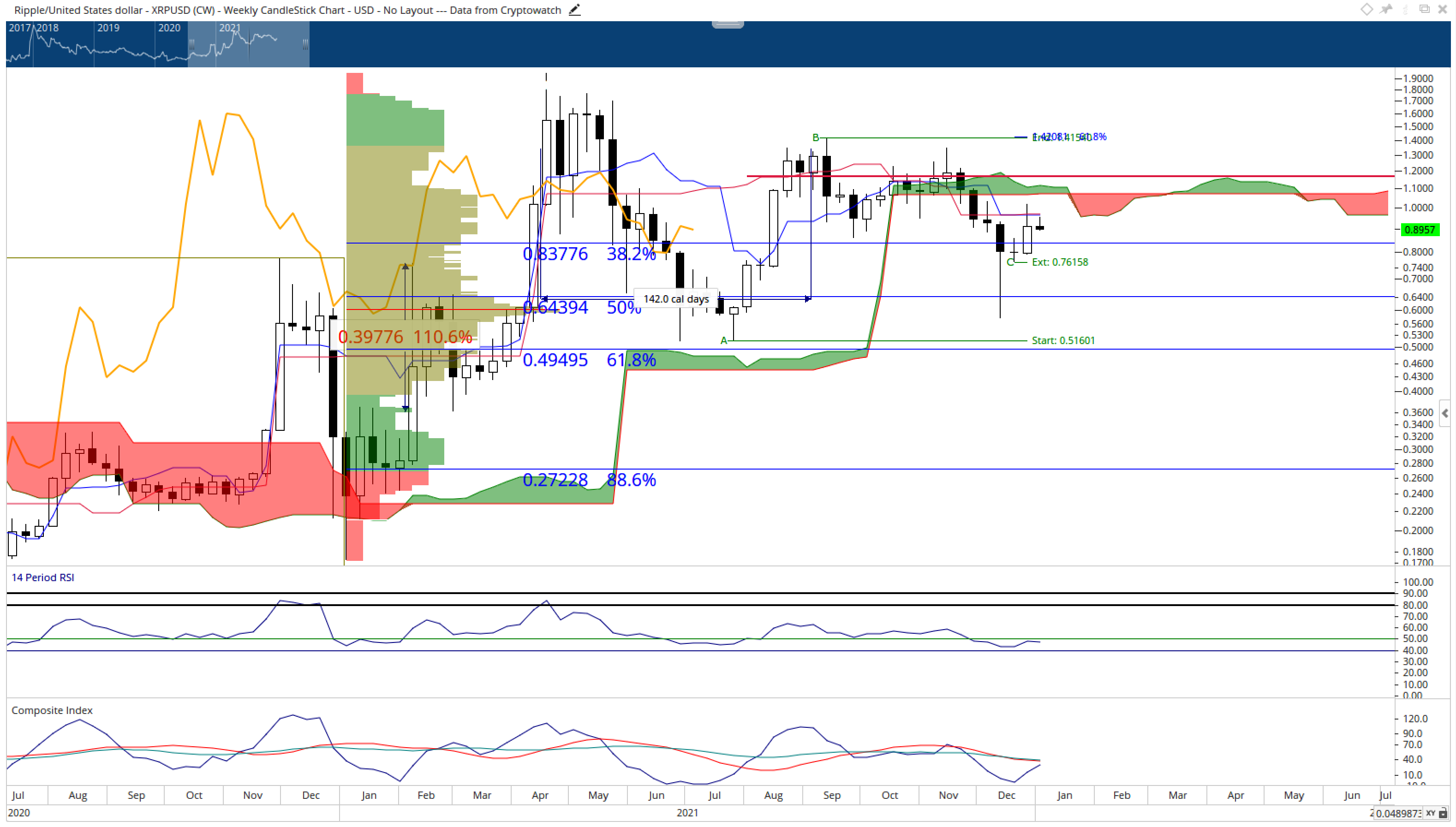 While downside risks would appear to be significant, real threats to any bearish activity wouldn’t occur until the Chikou Span were to close below the candlesticks. That being said, a return to the $0.70 value area is not out of the question.

Bitcoin price action mixed, solid cases for bear or bulls to take over. Ethereum price in a similar conundrum as...

As the market has recorded dip after dip, uncertainty has washed over investors. This has led to searches for other...

XRP price is not out of the woods yet as a 70% decline is on the radar. The last line...

Smart contract platforms like Cardano and Solana truly swept the market off its feet over the last year charting high...

Bitcoin Is In For A Global Regulatory Shakedown—As The Price Of Ethereum, BNB, Solana, Cardano, XRP Tumbles

Investors fear the crypto “winter” isn’t over as cryptocurrency prices keep tumbling. The price of Bitcoin, the world’s largest cryptocurrency,...

Did Arizona Introduce A Bill To Make Bitcoin Legal Tender? This Is What We Know

Bitcoin Stalls Below $40K; Analysts Point to Risk in DeFi