After its last rejection at the $12,000 resistance level in mid-August, Bitcoin has remained in a consolidation phase. At the time of publication, Bitcoin is trading at $11,721 with a gain of 0.6% in the last 24 hours. On the weekly and monthly chart BTC also showing slight gain of 0.51% and 3.37% respectively.

Analysts agree that a price move is coming

Bitcoin analyst and trader Josh Rager has been bullish on the Bitcoin price over the past few weeks. The trader stated that the higher time frames for Bitcoin present a bullish outlook. He also pointed out that the weekly candle closed above the support level at $11,550. In that sense, Rager stated that there is not much resistance between the current price and $13,000. The trader shared the following chart and commented that he expects BTC to test the $12,000 resistance level again soon.

Otherwise, Bitcoin seems to be receiving a positive impact from the announcements made by U.S. Federal Reserve Chairman, Jerome Powell. The central bank revealed a change in its monetary policy last Thursday. Powell announced that the inflation rate will be allowed to rise above 2% annually. As several important companies and personalities have stated, thus Bitcoin is further positioning as a store of value. Investors have increased their interest in the cryptocurrency to protect themselves from the inflation that will hit the dollar.

Since the FED’s announcement, as trader Teddy stated, Bitcoin is in a break or make it moment. Yesterday, August 30th, Bitcoin broke through resistance, Teddy stated the following: 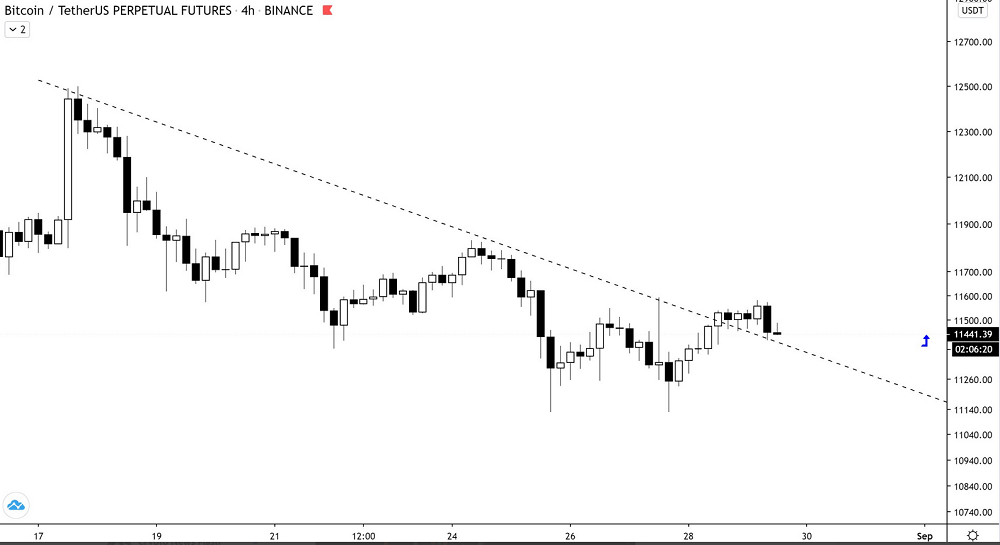 The trader agrees with other analysts such as Credible Crypto that $10,500 is a critical support level in case Bitcoin is rejected after trying to break the $12,000. In that sense, analyst Il Capo Of Crypto said he is waiting for Bitcoin, Ethereum, Litecoin and XRP to test new lows before reaching all-time highs. However, the analyst expects a new rally for Bitcoin if the cryptocurrency manages to consolidate above the $12,000 resistance level.

I still expect a last leg down on the majors before new highs. Potential bottoms:

I’ll be adding to my bags (shitcoins too) if the dip comes.

Regarding the Fed’s announcements, former Goldman Sachs employee and Bitcoin investor Raoul Pal said that he would have a positive long-term effect on Bitcoin and gold. Powell’s announcements, Pal explained, only reveal the Fed’s desire to continue printing money and devalue the dollar.

Powell has shown that there is ZERO tolerance for deflation so they will do ANYTHING to stop it, and that is good for the two hardest assets – Gold and Bitcoin. Powell WANTS inflation. Overall, I think #Bitcoin outperforms gold. Gold can go up 2x or 3x or even 5x while bitcoin can go up 50x or even 100x.

The lawsuit between American regulators (SEC) and the San Francisco-based fintech firm Ripple continues to see new developments. Ergo, it...

Bitcoin price could be bottoming out.  Ethereum price targets $1500. XRP price distortion hints at another sell-off. Bitcoin, Ethereum and...

BTC, ETH, XRP, ADA and BNB Price Analysis for May 20

Bulls have turned out to be more powerful than bulls again as the rates of most of the coins are going...

Why XRP price will see a bullish breakout to $0.51

Information on these pages contains forward-looking statements that involve risks and uncertainties. Markets and instruments profiled on this page are...

XRP Recovers 10% in a Week, Will the Recovery Continue? (Ripple Price Analysis)

The crypto market has not yet recovered from the recent collapse. During this time, Ripple continues its macro downward trend...

Shaken NFTs may yet survive — and develop their own star quality