Is The Launch Of A New Fund A Sell Signal For An Asset? Examples From Health Care, Commodities, And Now Bitcoin.

How US regulators are stymying DeFi for Americans

A Sell Signal For An Asset Class?

In the video below, I note that Bitcoin (CRYTO:BTC) has dropped by more than a third since the ProShares Bitcoin Strategy ETF (NYSE:BITO) launched, and discuss a couple of other examples of similar phenomena that came to mind. The first was when Alliance Capital (as it was known at the time) launched its healthcare fund in the late ’90s. At the time, Pfizer, Inc. (NYSE:PFE) was one of its top holdings, and an archetypical one at that. It was selling two of the biggest drugs on the market: Warner-Lambert’s Lipitor (starting in 1996) and its own Viagra (starting in 1998). And yet Pfizer’s share price hit a high water mark a few years later that it didn’t regain until last year with its BioNTech SE (NASDAQ:BNTX) COVID vaccine.

Another example I mention in the video was the ETNs based on Jim Rogers’s commodity indexes. As I recall, Jim Rogers wrote that he started investing in commodities again in 1998–perfect timing, with oil trading at $10 per barrel, and everyone focused on the dot-coms. But his ELEMENTS commodity ETNs weren’t launched until about 10 years later. And all three were down double digits over the next dozen years. 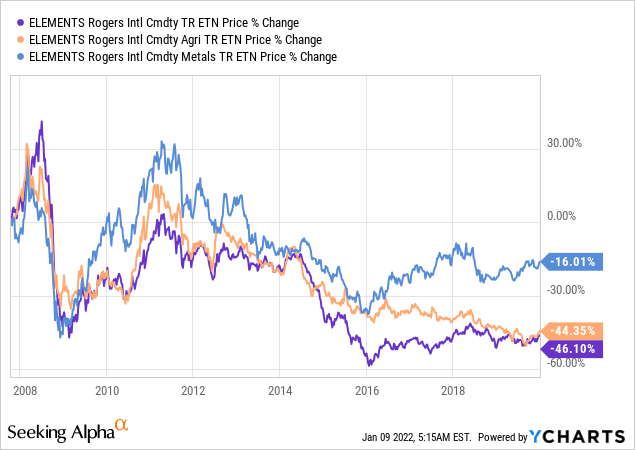 Some food for thought.

If you have other examples of this phenomenon–or counter examples–please take a moment to share them in the comments.

Most of the largest cryptocurrencies were down during morning trading on Wednesday, with Litecoin LTCUSD, -3.29% seeing the biggest move,...

How US regulators are stymying DeFi for Americans

As the push into decentralized finance heats up after growing 12-fold last year, one strategist is warning of two existential...

Expert Says Crypto Craze Is Just the Tip of the Iceberg

In spite of bitcoin’s recent drop, market experts foresee more strength after a bullish 2021, and this could just be...

Market Expert: Crypto Craze Is Just the Tip of the Iceberg

In spite of bitcoin’s recent drop, market experts foresee more strength after a bullish 2021, and this could just be...

What Is KYC and Why Does It Matter for Crypto?