in Blockchain
Reading Time: 4 mins read
A A
0

Bitcoin (BTC) was roughly flat over the past 24 hours as trading volume continued to decline.

Bitcoin Whales Stay Away Even as Technical Indicator Flashes Oversold

Meanwhile, technical indicators suggest a brief price bounce in BTC could occur if buyers are able to defend a daily close above $47,000.

Some traders appear to be optimistic as leverage as open interest in the BTC perpetual futures market, a type of crypto derivative trading product, increased above November highs.

“The boring market over the last month seems to have attracted traders back to leverage,” Arcane Research wrote in a report.

Also on Tuesday, the U.S. Securities and Exchange Commission (SEC) delayed its decision by 60 days on NYDIG’s spot bitcoin exchange-traded fund (ETF). The delay contributed to a sour mood across crypto markets as some tokens experienced a brief pullback after the announcement.

Historically, bitcoin tends to fall in January. The chart below shows the average monthly return in January is -3.3% over the past nine years. Over the same period, however, bitcoin registered a positive return roughly 50% of the time.

The probability of a positive outcome in January is mixed. That suggests some traders who are long BTC might sell ahead of volatility or may choose to accumulate on pullbacks as February shows greater odds for price gains, according to seasonal data.

Digital asset investment products saw inflows totaling $9.3 billion in 2021, a 36% increase from 2020, according to a new report from CoinShares.

Some investors pulled money out of crypto funds during the final week of 2021, as outflows totaled $32 million. The third consecutive week of outflows suggests some nervousness among short-term investors after the crypto sell-off in early December.

Bitcoin investment products saw a year-over-year increase in flows of 16%, while Ethereum products saw inflows double during the same period. 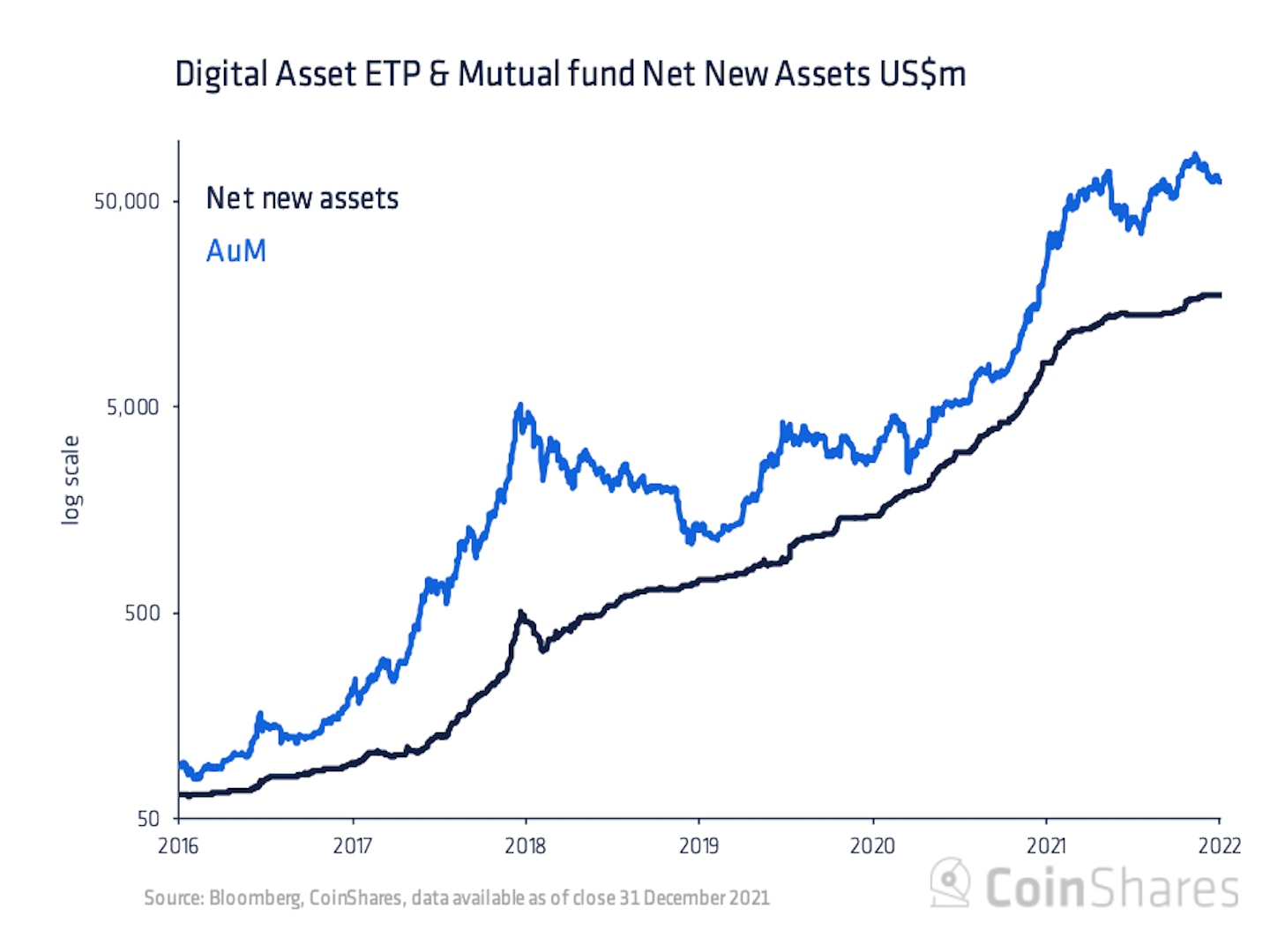 Most digital assets in the CoinDesk 20 ended the day higher.

The Bank of Korea wrapped up the first phase of a central bank digital currency (CBDC) simulation project in December...

Bitcoin Whales Stay Away Even as Technical Indicator Flashes Oversold

"Still a lack of large buyers, or what we refer to as "whales" on-chain. This looks at entities with over...

Who Writes the Story of the Metaverse?

IRL.This acronym has become shorthand for the regular, offline human existence in which we all participate, a realm lying outside...

“Crypto payments in C2B merchant acceptance are still nascent today,” according to a recent white paper from payments firm Nuvei....

For 2022, it plans to launch its corporate trading desk, Ripio OTC, aimed at institutional investors and high-net-worth traders, Ripio...

XDC Foundation Announces the Release of the XDC Network

Why Is Bitcoin Crashing? Ask the Stock Market