The precious metal hit a record high at $2,075.14 an ounce on August 7. But it failed to attract higher bids after that as it succumbed to profit-taking by short-term traders. The XAU/USD exchange fell back below $2,000 and continues to stay below the level as of August 21.

Bitcoin underwent an almost similar price action. The benchmark cryptocurrency established a new year-to-date high just shy of $12,500. Nevertheless, it also failed to hold the level as support as traders decided to sell their positions at local tops. Like gold, Bitcoin, too, continues to trade below a concrete price roof.

Both Bitcoin and gold appear to be surrounded by similar macro catalysts. They rose in tandem against the fears of inflation caused by the Federal Reserve’s “QE infinity,” a non-official term for the policy that pledges unlimited monetary aid to the US economy via bond-buying and near-zero interest rates.

Meanwhile, their corrections also appeared side by side, with their traders responding similarly as the assets hit their local tops. Apart from a few sessions, Bitcoin and gold almost followed each others’ latest downside corrections.

No Demand for Gold at Highs

Mark Mobius, the founder of Mobius Capital Partners, told Finacial News that investors should not chase the gold rally because of its stronger-than-expected resistance level at $2,000. The fund manager advised people to buy the precious metal only when it has neutralized its overbought sentiments to a certain degree.

“The safest investments are equities and precious metals such as gold,” he said. “However, I would not advise buying gold or precious metals at this time until a price correction has taken place.” 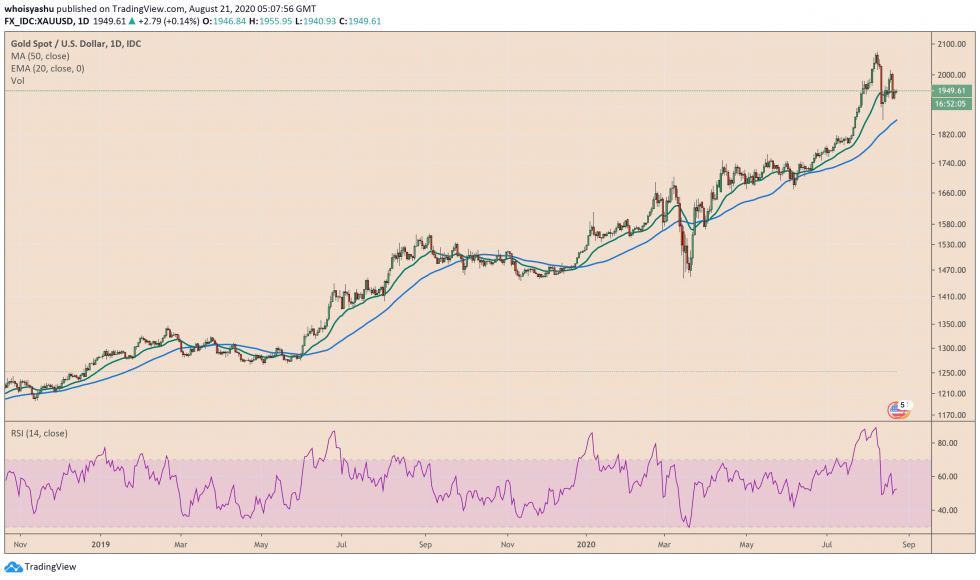 It was not only Mr. Mobius who treated the gold bull run as overblown. Last week, a Bank of America survey of fund managers revealed that 31 percent of them see the precious metal market as the second most crowded asset, falling only behind tech stocks. They called the gold price “overextended.”

The outlook left Bitcoin in a similar spell.

The cryptocurrency’s short-term correlation with gold hit an all-time time earlier this month before plunging lower. But its day-to-day price fluctuations matched the ones posted by the metal, revealing that traders are taking cues from the same macro factors that now drive the gold market.

That includes the Federal Reserve’s decision not to provide any new guidance on interest rates, according to the minutes of the July 2020 meeting released Wednesday afternoon. The decision earlier left investors in an uncertain state, prompting them to move part of their capital back into the US dollar.

So it appears, the uncertainty now risks putting gold and Bitcoin en route to their local support levels. For the cryptocurrency, especially, that price floor is sitting near $10,500.

BTC/USD could continue their rally upwards after testing the said support level, taking cues from what Mr. Mobius said about gold.

Bitcoin and Ethereum at Critical Juncture As XRP and COMP Prepare for Liftoff: Credible Crypto

Bitcoin and Ethereum at Critical Juncture As XRP and COMP Prepare for Liftoff: Credible Crypto