in Bitcoin
Reading Time: 2 mins read
A A
0


Bitcoin and the aggregated crypto market have been flashing mixed signs in recent weeks.

Despite smaller market cap altcoins being firmly in the throes of a bull market, major digital assets like Bitcoin and Ethereum have been stuck within firm consolidation trends.

While speaking about this, one analyst explained that he believes this consolidation may soon draw to a close once BTC is able to tap its bedrock support around $11,000.

At the time of writing, Bitcoin is trading up just under 1% at its current price of $11,615. This marks the lower boundary of the trading range that it has been caught within throughout the past few weeks.

Overnight, the cryptocurrency did dip below this level for a short period, but buyer’s ability to slow its descent and guard against further losses was a bull-favoring sign.

One analyst observed that this price action also allowed the crypto to hold above multiple key technical levels, including the upper boundary of its cloud.

“Price still chilling above the cloud on daily,” he said while pointing to the below chart.

Bitcoin could be on the cusp of seeing significantly further near-term upside, but it may first have to decline slightly lower.

The same analyst also said that a bounce at its 200-day moving average could be the impetus for massive near-term upside.

“Hope we get a retest of the 200ema. Historically the bounces were glorious – invalidation right below it.” 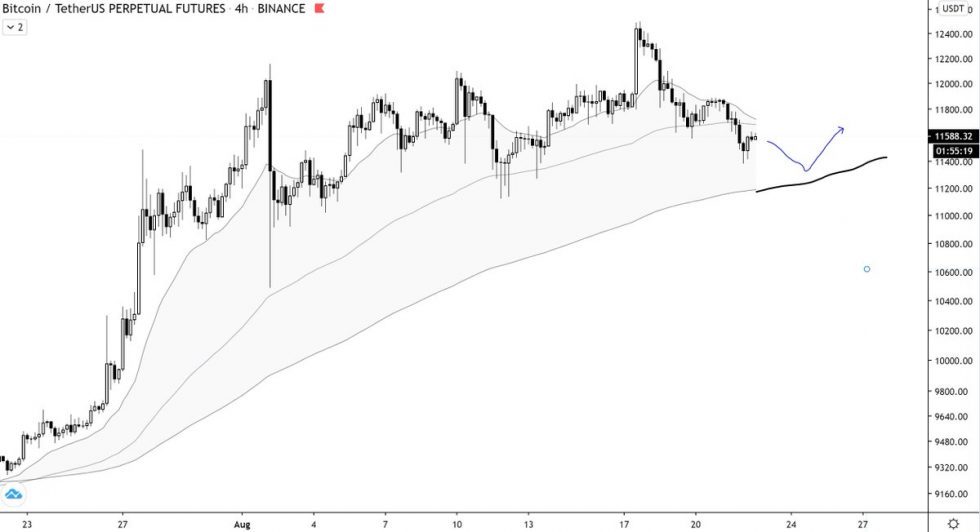 How BTC continues responding to these crucial levels that sit directly below its current price should provide investors with insight into its near-term trend.

Bitcoin Supply In Profit Drops To 55%, Is The Bottom Here Yet?

It’s all about methane. Finally, an ESG analyst takes a look at the data and gives bitcoin mining the praise...

Bitcoin Supply In Profit Drops To 55%, Is The Bottom Here Yet?

On-chain data shows the Bitcoin supply in profit has dropped to just 55% recently. Here’s what historical trend suggests regarding...

And so, there he goes. Bitcoin “cheerleader” Jack Dorsey is out from the Twitter board. The former Twitter CEO resigned...

Data shows the Bitcoin total transaction fees have continued to be at historically low values despite a spike during LUNA’s...

The head of the International Monetary Fund (IMF) stated at the World Economic Forum in Davos that despite the recent...